17 March 2017
I got another Fudou Yukimitsu. I decided to hunt Monoyoshi Sadamune despite the odds and my poor level swords.

19 March 2017
I got my first Tonbokiri. It seems that their probability of dropping were higher if I did not think about it. After him, Fudou Yukimitsu decided to grace me with his drunken presence for the third time. I was already resigned that my luck had already bought me this far with all those special swords dropped for me earlier in the event. I still won't gave up though and I told myself my luck for this event will really run out if I got Kogi or Jiji (since I thought Iwatooshi was easier to get than both of them). Aaaaaannd.......Kogi dropped for me!! 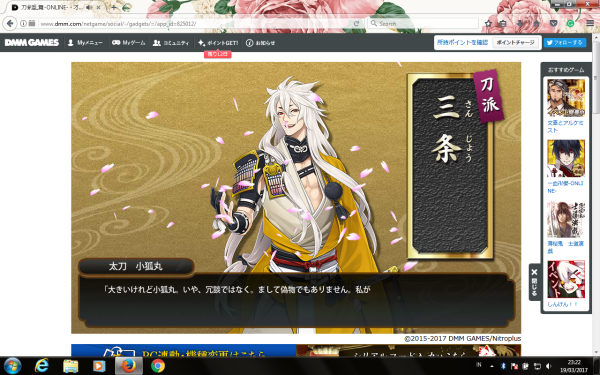 I still push my luck though because I did not have anything to do for the rest of the event. I still hunted for Monoyoshi the next day,

20 March 2017
This was my last day to hunt Monoyoshi because I could only go online at night. I tried for 4-5 hours until none of my swords were able to bear it without breaking. It seems that Kogi was really my last bit of luck in this event. I got Shishiou on E4 as the last rare sword drop for this event.

This was my second event after start playing Touken Ranbu. My first event was Underground Treasurechest simplified 3. I was not able to finish all the 50th floor. I think I stuck on the 46 floor. In my defence, my swords were not strong enough and I started playing 3 days before the event ended. Over all, this event was great and a huge success for me because I got 2 set of kiwame items, I got many new swords and the event swords except for Monoyoshi. I hope I could do better in the next WTE.
Tags: # aud post, # touken ranbu, # wtc 6
Subscribe